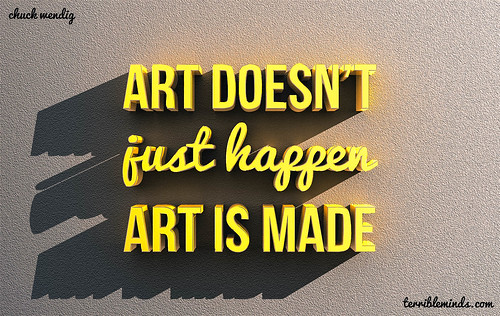 If you don’t know who Chuck Wendig is by now…

First of all, watch this.

Second of all, what the hell is wrong with you?

I’ve worshipped at the Altar of the Terriblemind more than once. It involves sacrifices of coffee, whiskey, tacos, and an outpouring of creative swears while dancing naked under the light of a full moon. While it’s yeilded quite a few fantastic books, which I’ll get to, it’s also given me the sense that I need to kick my writerly ass.

The last few months have been surprisingly stressful at the dayjob, which is perhaps due to extenuating circumstances in my head and diet and whatnot, but that’s not really an excuse. The dayjob only lasts a certain number of hours per day, and I could easily carve out more of the remaining time for writing. Hell, Hearthstone has long queues, as does Heroes of the Storm (waiting on my invite, Blizzard!), World of Warcraft has pauses for travel and queues of its own… and those are just the Blizzard games! I like to write posts like this while watching Crash Course or The Cinema Snob. It’s possible to pour the words into the cracks between the day’s longer hours. I just need to do it more often.

A while back, Chuck posted a photo of where he writes. It’s beautiful. Isolated. A window to the outdoors, a rig for his iPad (disconnected from the Internet, I’d imagine), a place for his coffee. I’m reminded again that not only do I need to make the time, I need to make the space. Sitting here tapping out blog posts isn’t too difficult, writing-wise, but it’s still incredibly easy to be distracted and if I want to get anything done, I need to focus. I must do that more often, just like I should work out more often. I can make all of the excuses I like about the dayjob or my mental/emotional state or what have you, but in the end, the only way to write is to write.

Wendig reminds me of this because, damn, that motherfucker’s prolific. He’s writing novels, novellas, serialized fiction, non-fiction about writing… basically everything a canny genre writer can write to keep writing. He’s got various points of entry if you’re not up on his work, too. Are you into vampires and/or zombies? Read Double Dead. Want a powerful female protagonist? Blackbirds is for you. How about urban fantasy mashed with gripping crime drama? Try The Blue Blazes. Young adult reader looking for something unique? Under The Empyrean Sky might be your bag. Just need advice/a kick in the ass for your own writing? Buy The Kick-Ass Writer already.

See what I mean? Whenever I worry that my ambitions are too “all over the place”, that what I write can’t possibly make it, Chuck reminds me that such thinking is bullshit. All I have to do is get off my ass. Or at least sit my ass down and write.