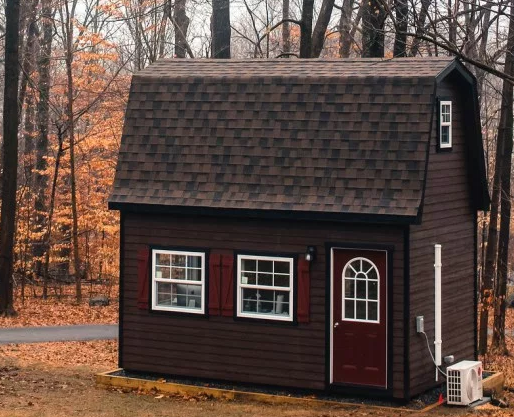 Pictured above is Chuck Wendig’s writing shed. It’s a completely standalone structure made to do one thing: isolate a writer and make them write. It’s a deliberate, concrete manifestation of disconnecting from the world around us, and exploring aspects of how our world was before or could be in the future. Perhaps new worlds are being created in this tiny booth of creativity and frustration. It’s hard to say, until either the writer emerges with manuscript intact, or you go to the door and you knock.

Just be prepared if you knock, because writers are most definitely a frustrated lot.

Being able to isolate oneself is, in my experience, rather essential to the process. I’m sure there are writers who thrive on doing so in the midst of a crowd. Somewhere out there, there’s a novelist who can’t make the words happen unless they’re sitting on a bench in the middle of Grand Central Station getting bombarded by people and PA announcements and smells and odd looks. More power to them, I say. I’m more of a “writing shed” kind of person.

The best I can do is walk up a few blocks to my local library and get in on one of their little work rooms; failing that, use a public terminal that doesn’t have about a thousand distractions a click away. Because let’s face it: writing is incredibly frustrating work, and most writers I know are more than happy to do things that are

Even this blog post is an example of this. I’ve gone back into my previous entries on writing to see if I’m repeating myself — I’m sure I am to some degree. I’ve looked at other writers’ Twitter accounts to see how far off I am — not all writers are the same, after all. I’ve been distracted by Discord, Facebook, the traffic outside, the sound of the TV in the flat’s main room. I’m thinking about my phone interview in half an hour. I’m thinking about Mad Max Fury Road, and Dungeons & Dragons, and…

Well, you get the idea.

If I were trying to finally put some damn words into the manuscript that’s been very patiently waiting for me to finish it, it’d be even worse. If I weren’t sitting in a place free of most distractions, save perhaps for some good mood music, I’d be getting nothing done and I’d end up frustrated over that. I know I can close my distractions as easily as I can open them. I try to do so whenever I need to get something like this done, let alone laying out hundreds of new words in a story I need to finish. In one particular case, there’s a definite need there, and despite its lengthy gestation period, I think this novel is becoming more relevant as time goes on, not less.

But that’s literally a story for another day.

With the weather in Seattle being its more temperate summer days of late, days of mild temperatures and little precipitation, going to a library for a few hours seems like a likely prospect until I secure more steady dayjob work. The challenge for me is making the time and devoting the energy to do so. Job searches are soul-crushing, heart-eroding, mind-grating things, and I think this is the longest one I’ve been on. I can’t yet sustain myself on writing alone, and the competition for freelance work is just as breakneck as it is for salaried positions, if not moreso. I’m not giving up, but I’m also reminding myself that I still want to write, need to write, and the only way to do it is, to use an old metaphor, “sit down at a typewriter and bleed.”

I’m going to be working to find the right time, and go to the right place, to do just that.