It’s been some time since I’ve discussed upcoming MMOs other than World of Warcraft. Since then, Star Trek Online revealed itself to be rather dull, other bloggers have gotten into the FFXIV beta, and there hasn’t been anything more said about the Twilight thing. Thank the Maker. So let’s see what developments have come along lately, shall we?

Not sure if want.

It was recently announced that Star Wars: The Old Republic will include space combat. This reminded me of the announcement BioWare made about the sex in Mass Effect. It’s aimed to drum up interest. In this case, those of us with fond memories of X-Wing vs. TIE Fighter (if not TIE Fighter itself, one of the best space combat sims EVER) can imagine ourselves enjoying that sort of gameplay in an MMO setting. Some might already be blowing the dust off of their HOTAS setup in anticipation.

However, BioWare’s previous attempts at space combat were somewhat lackluster. The elements of it in the KOTOR titles were a bit dull. I’d love to think that, if they borrowed anything form Star Wars Galaxies, it’d be at least the skeleton of space combat, because it was pretty good in SWG. But I, for one, will be waiting to see the end result.

So THQ and Games Workshop have issued a trailer along with some bits of info about the setting for Dark Millenium, their Warhammer 40k MMORPG. I still like the idea of playing around in this universe, but the fact that the trailer shows gameplay as a Space Marine makes me a bit leery. I’m afraid that Space Marines will become the blood elf death knights of Dark Millenium – everybody will be playing one, and they’ll all think they’re the most badass mofo with the best RP story EVAR. I want to know more about the other races and classes available before I render a final opinion, but for now, it seems to be going in an okay direction. More diversity and information, please! 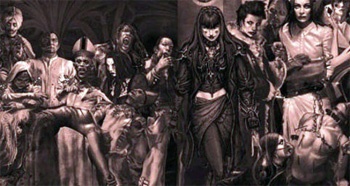 Fan boy wank aside, this prospect excites me for a variety of reasons. The World of Darkness is a rich, deep IP, that does supernaturals pretty damn well (especially in comparison to Twilight or Underworld) and contains plenty of basis for both PvE and PvP content. With every type of supernatural their own faction, and some being played by NPCs, there should be something for everybody there.

Beyond that, there’s the fact that the World of Darkness comes to us from White Wolf. Other than employing some extremely cool men and women, White Wolf is owned by CCP. Yes, that CCP. As in “creators of EVE Online.” These cats not only know how to make a decent and well-received MMORPG, they know how to keep it going and make things interesting for those who don’t even play the game. Like having six years of real world revenue get destroyed by a pirate raid. This boosts my confidence in the notion of this project not only launching successfully, but being worth playing and maybe even paying money to play.

For the time being, I’m still playing WoW. But I’ll be keeping my eye on these titles, and as soon as I know more, so will you.

Readers Can Get Lost