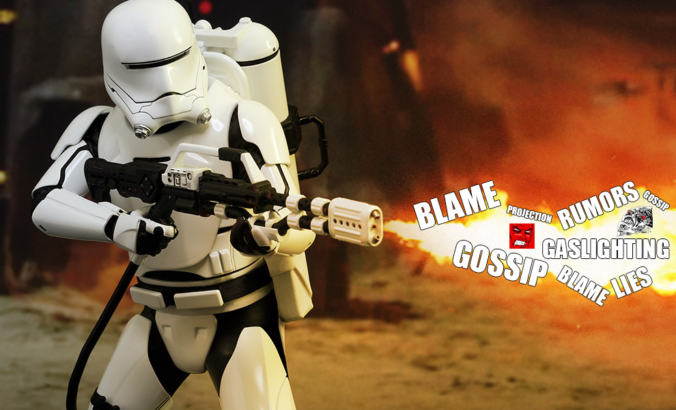 “A lie can get halfway around the world before the truth has a chance to get its pants on.” – Winston Churchill

I don’t know for sure if I’ve coined this term myself, or if it’s existed for a while, but I’ve been using “blamethrower” quite a bit lately. As in: “so-and-so made a mistake or became aware of a mistake someone else made, and they broke out the blamethrower.” It’s far too common a practice to pawn off responsibility for a mistake, no matter how large or small, onto another person.

Let’s be clear right from the off: we are responsible for our own actions. When we make a mistake, we want to find some explanation. Ideally, an external source — a diagnosed (or undiagnosed) mental condition of ours, a flaw in another person, extenuating circumstances. If we can seize upon one, out comes the blamethrower. We set alight the explanation quickly, setting it alight so that it draws attention, ours and that of others, away from the bad decision we made and towards whatever we’ve chosen to bear the brunt of the blame.

The insidious part is, it’s very easy for others to break out their blamethrowers as well. Fire is fascinating, and it attracts onlookers. All too often, they jump on the bandwagon, contributing fuel to the fire. In these days of social media and infectious groupthink, this can happen at an alarming rate.

Even worse, this can happen when the party getting set on fire has done nothing wrong.

Victims of assault and abuse are set alight with blamethrowers all the time. In those cases, it is often referred to as ‘gaslighting’. The more fuel is added to the fire, the more the person in question is dehumanized and perceived to be something or someone they’re not. As the rumor mill spins up to dizzying speed, throwing off flames like a Catherine wheel, it gets harder and harder for the person in question to cope with the situation, determine their true role in things, and assert their inherent personhood.

Worst of all, blamethrowing is a tool that can be used to further political agendas.

Those in positions of power, be it the potentate of a nation or the vanguard of a social group, can mobilize their key supporters to bring someone forward as a strawman to set alight. The nature of the person or the particulars of the circumstances matter little; what matters is burning down someone so that the “ruler” looks better by the light of the flames. When you exist in a social group, if you make a mistake that offends, or suffer abuse at the hands of, a person or people in power, it’s all too easy for you to come under fire; the bandwagon rolls on, and you are crushed underneath.

The only thing we can do in the face of blamethrowing is assert our sovereignty, own our portion of responsibility (if any, in the case of victims of abuse), and strive to be the best versions of ourselves we can be in light of everything. It’s never easy. But it’s all we can do.