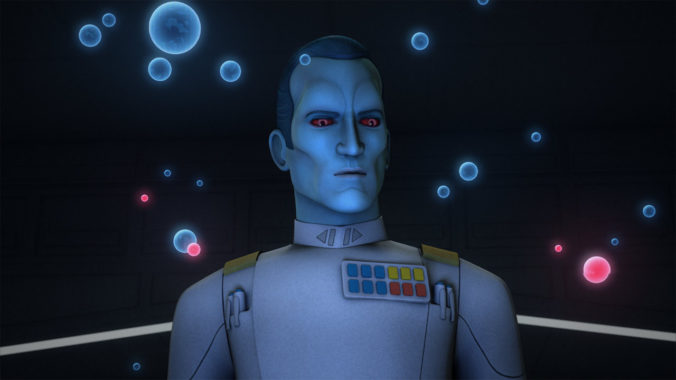 Admiration for an Admiral

“No one is immune from failure. All have tasted the bitterness of defeat and disappointment. A warrior must not dwell on that failure, but must learn from it and continue on.”

I’m trying to think of a villainous character that has affected me as thoroughly and deeply as Star Wars‘ Grand Admiral Mitth’raw’nuruodo.

Writing villains seems deceptively easy. Give them a plan of conquest, add some mustache-twirling or overtly abusive behavior, make them cruel to underlings, plant petards on which to hoist them. Wipe your hands, done and dusted.

Not so with Thrawn. Yes, he’s diabolical in thought. He’s ruthless in executed action. He’s the direct and diametric opposite of our heroes.

But, especially in the “new canon” — the Rebels animated series and especially his origin novel by the inimitable Timothy Zahn — there’s something admirable about the admiral.

The Empire, in Star Wars, is just as much a stand-in for Nazi Germany as Sauron is a stand-in for the Kaiser, or Adolf Hitler. It is a brutal, xenophobic regime, dedicated to a ‘purity’ within the galaxy and the utter destruction of unrestricted thought and the usage of power, not for its own sake, but for altruism and introspection. The Empire is always looking without, never within, and assaulting the opposition and the misunderstood with seething hatred and disgusting self-congratulation.

And hither comes Thrawn, an alien, a warrior, and seemingly, the last thing the Empire would want.

Thrawn is a free thinker. He is just as much a philosopher as a tactician. He is aware of how clever he is, but he applies that cleverness to his goals, which is always the defeat of his enemy. He has his moments of weakness, and of failure, but he uses those moments as lessons to be applied to future encounters. He respects his enemies. He despises incompetence and foolishness in his would-be peers. In an Empire full of hotheads, egomanics, and demagogues, he is cool, measured, respectful, meticulous, and, in species as well as thought, alien.

I find these qualities admirable, and I wonder: is he truly villainous?

Yes, he works for the villains. Yes, he exhibits ruthlessness towards the heroes. Yes, he employs occasionally brutal tactics to achieve his desired goals — which, as befits a warrior, is the destruction of his enemies.

But does he do these things out of malice? Blind hatred? Ignorant, projected rage?

No. He wages war because he’s good at it, he finds it a fascinating application of his abilities, and, in the end, he likes it.

Not inflicting pain, mind you. He’d much rather defeat an enemy expediently, demonstrate that they will lose, and offer them a chance to surrender and save lives. He is an artist, his medium is warfare, and his materials are the ships, troops, and officers at his command. He’s loyal, dedicated, charismatic, and cool under fire. He has the wherewithal to admit to mistakes he makes, admire his opponents, and do whatever is in his power to improve himself and those around him for the betterment of all.

Aren’t these qualities we often find in protagonists, in heroes?

We don’t really attribute honor, introspection, and respect for others to the Empire, or the Nazis for that matter. More often than not, it is those we admire and those cast as positive protagonists in our stories that exhibit such qualities. And, according to Zahn in the new canon novel, Thrawn may indeed be more than just another villainous tool in the Emperor’s arsenal. I’ll put this bit behind a spoiler tag.

Spoiler
Thrawn explains to the Emperor that he was exiled from the Chiss Ascendancy due to his use of pre-emptive strikes. This is a lie. The Chiss sent Thrawn as a scout, to suss out the Empire’s abilities and strengths and evaluate them as potential allies in battling threats from deeper within the Unknown Regions. This is a huge risk for Thrawn: if he is caught or killed, he will be unable to relay anything to his true superiors. That, to me, is a heroic undertaking. By the same token, he shows a great deal of trust in Eli Vanto, sending the human officer to the Chiss as a contingency a calamity befalling Thrawn personally. A friend and confidant, Vanto can inform the Chiss of a great many things, and bridge the gap between the galactic powers if Thrawn is unable to do so.

Maybe it’s just me. Maybe I’m biased towards antagonists who favor brains and cunning over brawn and bluster. Maybe I’m just seeing what I want to see; there are aspects of Thrawn that personally speak to me. The same way that Sherlock Holmes or Tyrion Lannister are characters who rely on cleverness and discernment to achieve their goals, Thrawn is defined by his brilliant mind and careful application of deduction and strategy. I know I could use more of that in my life.

Either way, I’ll be sad if the last season of Rebels is the end of Thrawn’s story. He’s mentioned in Chuck Wendig’s Aftermath trilogy (now available in paperback, go buy some books), but his fate is left ambiguous. It’s unclear to me, in the end, if Thrawn is truly a villain, but in this case, he’s certainly cast as one.

But not all those cast as villains truly allow evil to fester in their hearts.

I would like to think that if Thrawn truly feels emotions like hate, he can examine, disassemble, and reorient those energies. His few moments of anger are still incredibly restrained by Imperial standards, and it shows a quality of character rarely seen among the one-dimensional jackbooted thugs around him. It speaks to someone who is more than the sum of their parts, more than the mere sketch of the role into which they are cast.

And, in the end, who among us isn’t more than they seem or are reported to be?