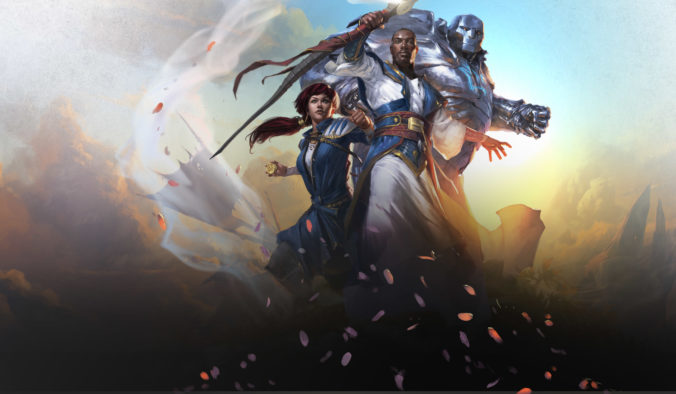 I really wasn’t expecting to get back into Magic: The Gathering.

I’ve been a Hearthstone player for a while, now. And it did a decent job of scratching that CCG itch that started back in ’93 or so when I first picked up my first starter deck of Magic. The Warcraft theme and some of the design elements of Hearthstone still hold some appeal, but I can’t deny I often felt something was missing. I play EDH (Commander to you young ‘uns) with my father and brother-in-law on the holidays, but that wasn’t often enough to clear up my feelings.

Then I got into the Arena beta, and everything started to click.

Don’t get me wrong, I still think Hearthstone has its place. Mucking around in a Tavern Brawl or even playing a couple of games on the ladder is good while I’m waiting for coffee water to boil or if I’m sitting on the toilet. But knowing what I know now, I don’t think I’ll be playing it as often, nor will I be streaming it. It all comes down to a single word — interactivity.

I’m the sort of person who gets the most enjoyment out of a game when I’m working to anticipate the moves my opponent are likely to make. I want to set myself up for success. A non-interactive deck undercuts that enjoyment, and very few decks in Hearthstone feel interactive. I mean, it’s one thing for me or my opponent to have to work in order for a particular combo to go off; it’s another when I feel like I’m getting ground up in my opponent’s well-tuned piece of cardboard clockwork. Not to mention a few people I’ve played against in person who put together those sorts of decks have been incredibly smug about it.

To put it another way, there have been times when I’ve felt like I can just walk away from Hearthstone for a bit while my opponent takes their turn because there’s fuck-all I can do about whatever it is they’re doing or planning to do. Magic gives me the opposite feeling. In anticipating my opponent’s plays, and either having an immediate response in my hand or knowing I could be just one draw away from swinging the advantage back in my direction, I’m engaged from start to finish. I can plan ahead. My brain’s always working. And losses feel as earned as wins. “I have to watch for that next time, because this time X happened.” Sure, getting screwed or flooded by decks happens, but that’s different. At least, it feels different to me.

Among the other things that make me feel excited about the “fresh start” feeling I’ve been cultivating for a couple of weeks, the prospect of getting more into Magic, both in person and in Arena, has my brain aflutter with possibilities. Between setting up new decks to take with me this holiday and participating in more events locally, there’s something about Magic being a part of my life again that feels… right, for lack of a better term. Sure, it will take some time, and I’ll want to be more stable financially before I start making the more serious investments. But anything worth doing is worth taking the time to do right.

In the meantime, I’ll keep playing Arena and honing my skills. Even if that means I’m going to have keep playing burn for a while.