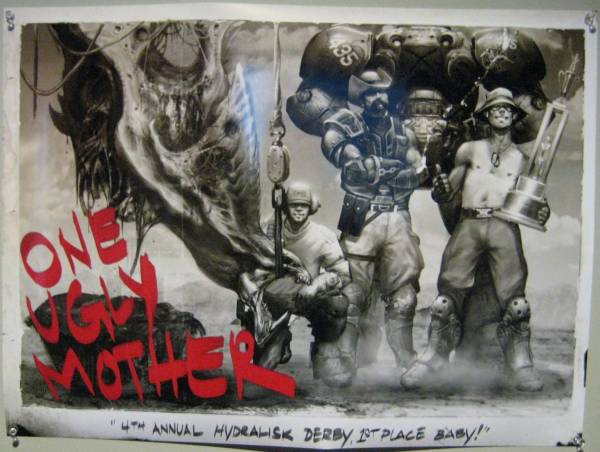 Somebody’s gotta feed these boys before they go out fightin’, and that somebody is you.

Thus, though we have heard of stupid haste in war, cleverness has never been associated with long delays.

You don’t get bonus points for unspent resources at the end of a match.

It’s a concept that can be difficult for new players to wrap their heads around. The biggest, baddest units in any given race’s arsenal costs quite a bit of minerals and gas. However, while you’re saving up for that shiny fleet of capital ships primed to rain death and destruction on the foolish folk arrayed against you, they’re likely to be churning out squadrons and legions of lesser units for a fraction of the cost. And those ‘lesser’ units just might walk into your compound while you’re sussing out all of the tech necessary for that pinnacle of your race’s achievements.

Let’s do a bit of math on this very subject.

“This is my C-14 Impaler Gauss rifle! There are many like it, but this one is mine!”

This is a Terran Marine. He costs 50 minerals, consumes 1 supply (“food”) and is produced in 25 seconds. He comes from a Barracks, a structure costing 150 minerals built after a construction period of 60 seconds. In turn it cannot be produced until you make a Supply Depot, costing 100 minerals and 30 seconds. And you need an SCV to build all this stuff. That’s another 50 minerals, 1 food and 17 seconds production time.

So the total cost of your first marine is 350 minerals, 2 food and 132 seconds total.

Arguably the most powerful single unit in the Terran arsenal, the Battlecruiser costs 400 minerals and 300 gas by itself. It is produced at a Starport, which cannot be built without a Factory. The Factory is dependent upon the Barracks. Additionally, you must produce at least one Refinery and sortie a number of SCVs to harvest Vespine gas from it. Oh, and you can’t build one without a Tech Lab on the Starport and a separate building called a Fusion Core. So, crunching numbers like so, here’s the total cost of your first Battlecruiser, listing minerals/gas/time for each building and minerals/gas/food/time for each unit:

See where I’m going with this? For the cost of a single Battlecruiser, you could field 10 Marines quite comfortably. And with the surplus gas you could give them a weapons upgrade, combat shields or stimpacks.

Now, if your macro is good and your economy humming along, you can produce a cadre of bloodthirsty, Gauss-toting Marines while teching you way up to a Battlecruiser or two, but the point of this little exercise in arithmetic is to demonstrate how much easier it is to produce the basic units of a race, and how important that habit can be to a burgeoning player. Any race’s macro can and should include constantly producing workers and basic units along with climbing up a chosen tech tree as a strategy begins to grow. As your skills improve, producing a ‘backbone’ of basic warriors concurrently with your shiny high-tech units will become second nature. And when thinking about this process no longer becomes entirely necessary, your mind will be free to worry about things like counters to your opponent’s units and canny ways to apply pressure and exploit map advantages.

But you have to walk before you can run, and in StarCraft terms that means spending your resources quickly and effectively. Start with the basics, and go from there.

Send Up A Flare