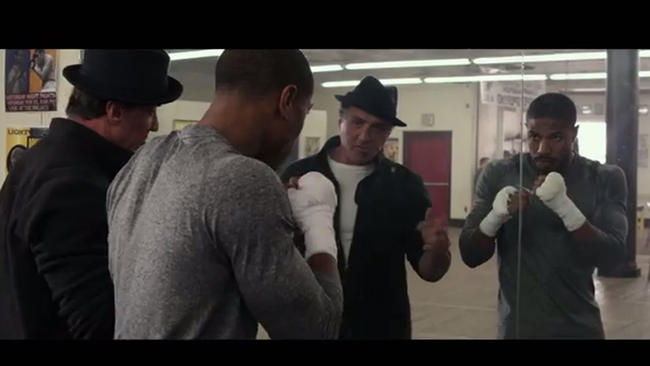 It can be difficult to recognize the face that looks back at me in the mirror. Especially since I’ve grown my hair out and started styling my facial hair in certain ways. But the eyes are still there, the eyes I’ve had since I was a child. They’ve seen a lot, perhaps more than they should have. I see them in the mirror, these mechanisms through which I see the world, and try to process who’s looking back at me.

Is this a person worth fighting for?

Movies with Mikey‘s “Creed” episode draws attention to a mirror moment, where the protagonist is told by his coach (Rocky Balboa, in this case) “that, right there, is your toughest opponent.” A somewhat unspoken agreement — a ‘creed’, if you will — between fighters is discussed. It’s simple: “I fight, you fight.” If you step into the ring, so will I, and we’ll each give our all to prove ourselves to ourselves and to one another.

(Seriously, if you’re not watching Movies with Mikey, do yourself a favor and check it out.)

I’ve started repeating that creed to myself when I see myself in the mirror.

Who or what am I fighting, though? Is it that other person, the one in the mirror?

In the past, that person in the mirror has resembled someone else. Someone I don’t recognize. Someone who had been influenced by other people.

First of all, some of those people are fucking monsters.

Not everybody has your best interest at heart. People will seek to take advantage of you, to exploit your weaknesses. Those sorts of abuses, which can hurt more deeply and thoroughly than any punch or cut, give fuel to the monsters that live in our heads, the voices that say we’re better off dead.

That’s what I’m fighting. Those voices, those monsters, those irritating head weasels.

You can’t see them, though. And it’s very, very hard to fight what you can’t see. Ask anybody who has a chronic pain disorder or a mental illness. Ask about their experiences with doctors, with society. You’ll see how hard it is to fight the unseen.

What we can see, though, is the person in the mirror.

The final trap in this is the one in which we fight against ourselves, not with ourselves. The difference is that in the former case, we make ourselves an antagonist, a foe to be conquered. But what good do we do ourselves if we cast ourselves as our own villain?

We can be our greatest ally, instead. Whatever the threat might be is one that both entities fight together. You can see what was, or you can see what could be. When you see the image of yourself in the mirror, it’s yours. The you in the mirror is a you that needs you.

Songs of Cornell: Just Getting Started